This post contains affiliate links. We may earn compensation when you click on the links at no additional cost to you.

Ready to take that bucket list road trip with your family across the country? Add a stop in Memphis, Tennessee! From Elvis to Beale Street and National Civil Rights Museum at the Lorrain Motel, there is a lot to do with kids.

I took a little break from sharing our road trip because it didn’t feel right to be encouraging travel right then. We also cut our whole trip down, even cutting out a couple of stops, shortening others, and extending other ones as we hopscotched over and around hot spots. I am feeling a lot more comfortable just going with the flow these days and that made this trip a lot less stressful going into it knowing we would have to be flexible. I really can’t wait until we finally get past all these surges and this thing really ends. Until then, I’ll be sharing as it feels right. Back to our trip…

We had never been to Tennessee, so we were all super excited to get a feel for this new-to-us state. We stayed at the Hyatt Centric Beale Street Memphis and I am including a mini-review and photos of the hotel for you to see.

I chose this hotel for a few reasons. First, it was a new hotel having just opened a bit more than a month before we arrived. Secondly, the location was great and we were able to walk to a lot of things we wanted to see and do. We were also able to use Hyatt points to pay for both of our rooms for the two nights we were there. Win, win, win!

Both of our rooms at Hyatt Centric Beale Street Memphis were almost the same except the girl’s room had two queen beds instead of the king-sized bed in our room. The other difference was that our bathroom was in our room. As you can see below in the pictures, it was open into the bedroom. Not a big deal if it was just Pete and I on this trip, but with connecting rooms, it could have led to an awkward moment if this were a friends’ trip. It is a funky layout for the King room and the 2 queen bedroom felt a lot bigger and had a properly closed-off bathroom.

The view from our rooms was really awesome as they looked over the pool and out to the Mississippi River.

We were happy with our stay at the Hyatt Centric Beale Street Memphis, and it would be an even better choice for a non-family visit. At night it was hopping and we heard multiple accounts of how amazing the rooftop bar was.

Thankfully, at the end of the day, we were pretty tired from exploring and we retired to our rooms early-ish to rest up for the next day’s fun. For those looking for more of a vibrant nightlife, this is right by the start of the famous Beale Street party zone, <— I think I made up part of that name but you get the gist of it.

During our stay, the hotel was definitely going through growing pains (opening pains?) coupled with this being a challenging travel time all around so we brought our patience and understanding.

This was also our first time at a Hyatt Centric and as they are known for their location- it was spot on to what I expected. We stayed at other Centrics on this trip and they too were in great spots. Hyatt Centric’s rooms are not huge, but that is made up for by the central location to all the fun!

Here are a few pictures of our room (King Bed Room) at the Hyatt Centric Beale Street Memphis.

It rained a bit on our first night so we laid low and took a quick walk along the river.

And the next morning we walked over to Bedrock Eats and Sweets.

Their entire menu is gluten-free and they also have a large vegan section which was perfect for our family! They had plenty of outdoor seating and because we were in Elvis territory, one of us even ordered the fluffernutter waffle. It was even better than it looks!

After breakfast, we headed down to the famous Beale Street, Memphis.

Here’s the deal. During the day, Beale Street is totally family-friendly. In fact, I’ll go as far as to say it is a good place for families. At night, not so much. After dark, it is like party time on steroids. If you are into that scene, you will have a great time. Just an FYI.

So what did we do and see on Beale Street- a lot!

The first stop was for ice cream. I can’t even remember how many times Emmy told me she will never take for granted trying new ice cream in new places. She said that it just became part of our travel experience before and this time she really realized how lucky she is to be able to try it all over the world. This ice cream tasted even better knowing that it isn’t a given that we can just go where we want and eat all the ice cream. Ha!

We did a little non-schooling…

We all love to stop and read these kinds of signs. It is a great way to learn in a non-school environment but also a way to really take in history by learning about it where it actually happened.

Be sure to look both up and down for all sorts of fun things to see!

There were a lot of restaurants open serving food and music blasting all over so it was a really fun atmosphere. We didn’t see any outdoor dining options so we didn’t stop for food beyond the ice cream. In regular times we would have stopped for something to eat.

We also did some souvenir shopping here. There are shops up and down the street for that too!

The street is all blocked off too so you can safely roam.

After Beale Street, we walked over to see The Lorraine Hotel.

This area in Memphis is super walkable. I would actually encourage you to walk because there are a lot of things you can see without even setting out to see them.

The Lorraine Hotel is famous for a very sad reason. It is where Martin Luther King Jr. was murdered on April 4, 1968.

The hotel has since been turned into the National Civil Rights Museum at the Lorrain Motel. From the outside, you can view the facade as it was the day that he was shot. He stayed often in room 306 and there is a large wreath marking the balcony. You can also turn around and see where the murderer was during the shooting on the building behind. They have a tall glass piece there you can walk through and stand where he did. I had no desire to “walk in his shoes” so we didn’t do that, but the vantage point might be interesting to see where Dr. King was at that moment.

When we were there both areas were pretty crowded so we kept with our plan to stay outdoors.

I didn’t expect to be as emotional as I was here, but it is what it is. I just kept thinking of the magnitude of not only his death but the death of so many people’s dreams that he was carrying.

There are murals all over Memphis, but this one, in particular, was one we sought out to see. It is called I Am A Man. It is a graffiti rendition of the famous photo by Richard L. Copley of the Sanitation Workers Protest in 1968.

The “I Am A Man” saying has come to have many different meanings, all based around the idea that all people deserve to be treated with dignity. It is also a statement of opposition from tyranny. The Sanitation Workers Protest was a pivotal point in the civil rights movement and so was this saying, but of course, there is much more to this.

Many black men have said this long before this protest as they were barraged and belittled by being called “boy” instead of the men that they were.

This was another one of those moments where seeing this in person felt deeper than anything I have ever read about it.

We kept our eyes open to see as many murals as possible. Of course, they are learning lessons, and we love that part of it, but we also relish in the talent of the artists too!

Now no stop to Memphis is complete without going to Graceland, right?

So we did it. We went to Graceland. I want to tell you that we had a great tour. Saw where Elvis was buried, went onto his private plane, toured his house and grounds and all that fun stuff. But the reality is that we didn’t do much of any of that. We drove by it all. We saw the plane from the outside and we went through all the gift shops that are just beyond the parking. We were not sure what was available outside so we pulled up to the parking lot attendant, paid the parking fee, and asked. Pretty much you can go in all the gift shops and peer through the fence a bit to see the planes and that is it. Again, in normal times we would have gone in and done it all, but since only 4/5 of us are vaccinated (Emmy is still too young to be eligible) we stuck to our outside-only plan. And you know what, it was still fun!

We really did enjoy Memphis.

We would for sure go back to be able to actually go inside many of these places, but we really felt like we got a good feel for the area. If you are into jazz, nightlife and want to have some fun, you can’t go wrong with Memphis.

If you are a family traveling with kids, plan for your days to be packed with adventure, and for early evenings back at the hotel resting up for the next day. 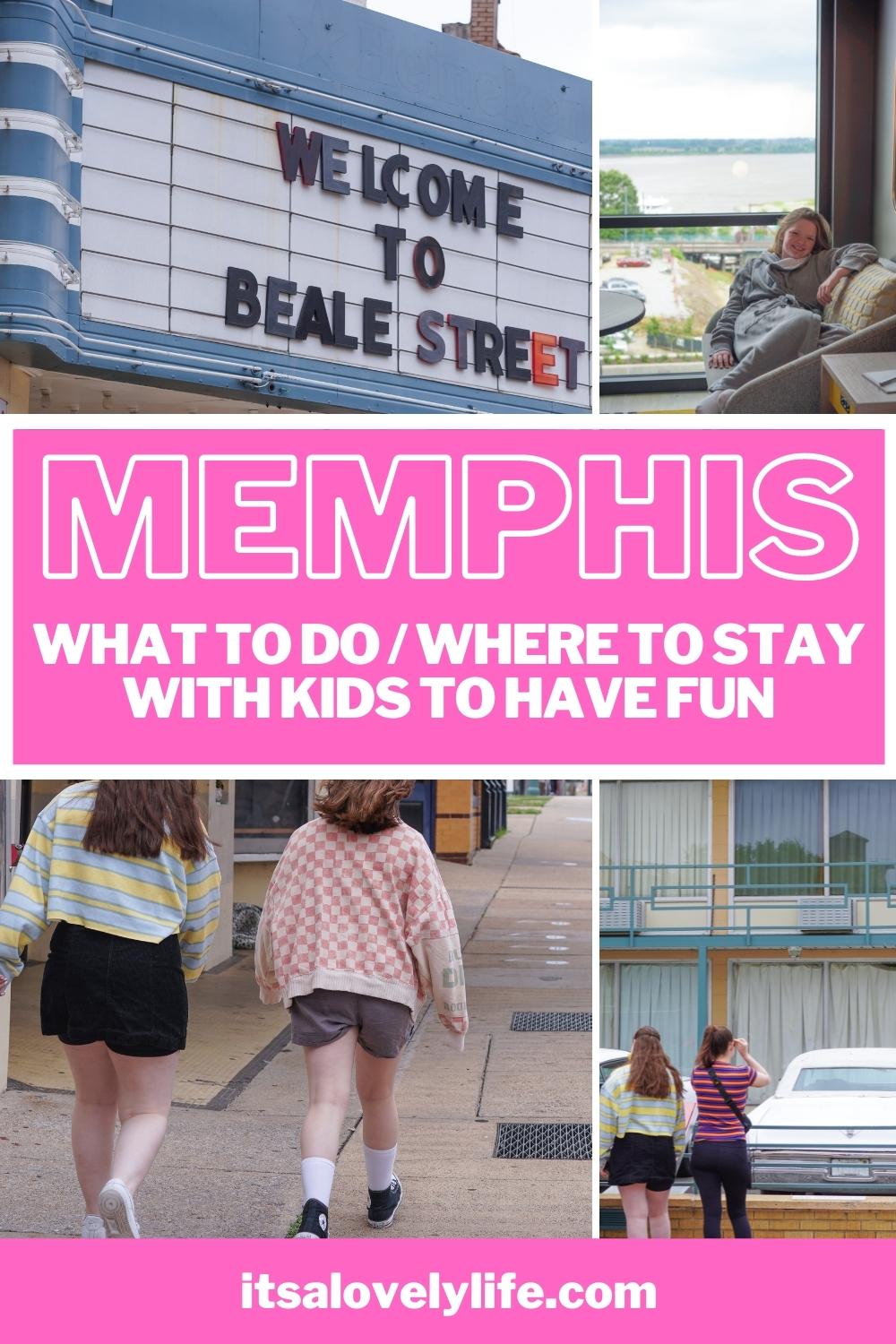